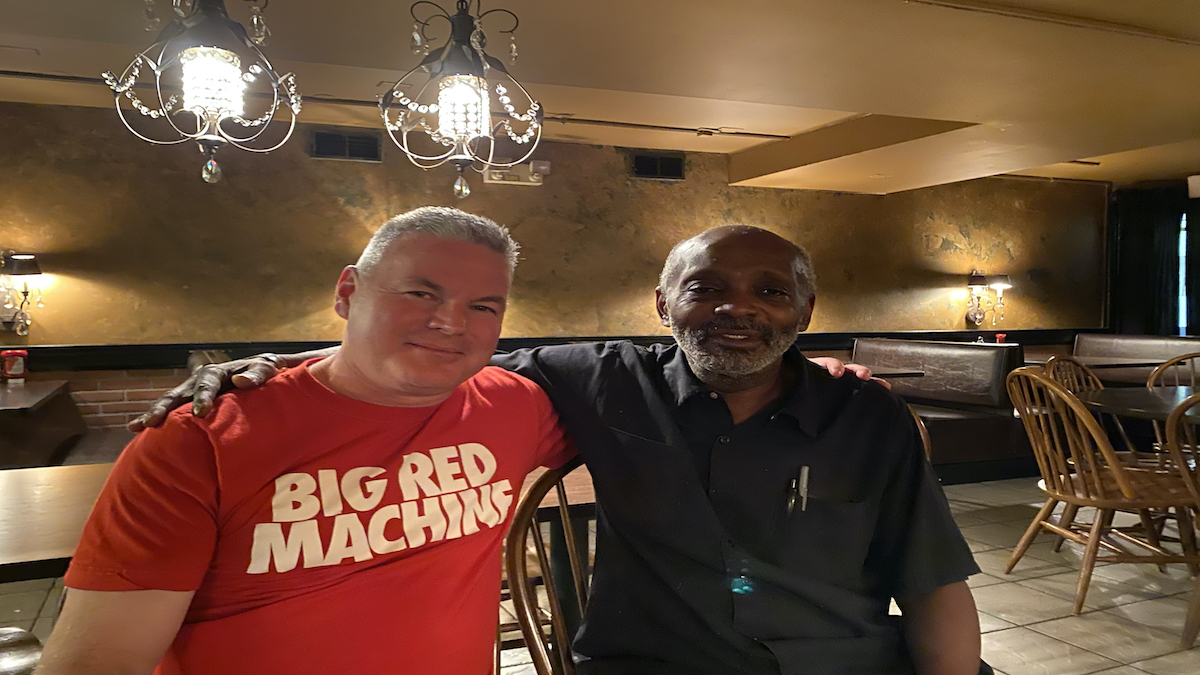 While in Nashville, TN this past weekend for the Berkshire Hathaway HomeServices annual convention, Kim and I had the privilege of eating at Tazza, located at 510 Church Street in downtown. Tazza is not one of those restaurants that seems to be extremely well known or sought after, but it was right across the street from where we were staying (which made it extremely convenient) For those of you wondering, Tazza serves Greek Italian food….and yes it was fantastic.

When Kim and I first entered the restaurant we were greeted by a middle aged African American man that later became known to us as Ernest Anderson. He was extremely well mannered but yet he just looked like he was exhausted. Not in a bad way…just tired.

As Ernest was walking us to our table I let him know that we had eaten there for lunch the day before and I had the Steak Sandwich with peanut sauce. When he heard this he stated, “Well then if you liked the Peanut sauce you need to try MY chicken wrap with Peanut sauce….and if you like Pasta…you need to have the Pasta New Orleans.” No argument here…

As we waited for our order Ernest stood and talked with us for quite some time. We learned some absolutely amazing things from this man….including some major history of the downtown area of Nashville.

Ernest was 60 years of age and was born and raised right there in Nashville. He has been with Tazza for about 12 years now and he says he absolutely loves it. But then we learned….

Ernest lost everything he owned just a few days before in the horrific tornadoes that tore through the greater Nashville area. He stated that the night before he had to sleep on the street across from the restaurant because he was not able to make $75.00 yesterday in order to pay for a hotel room.

His story of how he had been living the last few days was mind blowing as the apartment complex where he had been staying had been condemned after the storm. HOWEVER…he remained so positive and thankful just to be alive.

I asked him what he did before working with Tazza and he stated that he had spent quite some time in prison for a crime he had committed in order to protect his sister (He told me the reason but I will hold that information in confidence). Either way…he also told he had received his culinary license and was just thankful for second chances.

I know this story may not be intriguing to you. It may very well be mundane and maybe some you don’t even believe it…that is okay. But as sure as I am writing this right now…I am letting you know that this man’s character, customer service and concern for our well being were top notch.

No matter what he was going through right now, or how hard his life has been (And there was plenty more that he discussed)…he remained positive and made sure we had the best dining experience possible.

I have never been more inspired by anyone in the restaurant industry, and it made me think…”Do I allow my current situation to effect the way I treat others? Does my customer service nose dive when I begin to get down on myself due to the things I have experienced in the past? If I was forced to sleep on a flattened cardboard box outside in the cold and rain would I be able mentally and physically pull myself up to work in such a way as Ernest?

How about you my friends? Do you allow your current or past experiences to define how you treat others such as your clients or customers? If so, take a lesson from Ernest Anderson. If you put your mind to it….you can still provide excellent customer / client level services even if the “storms of life” leave you with nothing. It is just a matter of mindset and being thankful.

Until Next Friends ~ MLT

ps: If you are wondering…Ernest did not have to sleep on the street that night. : -)