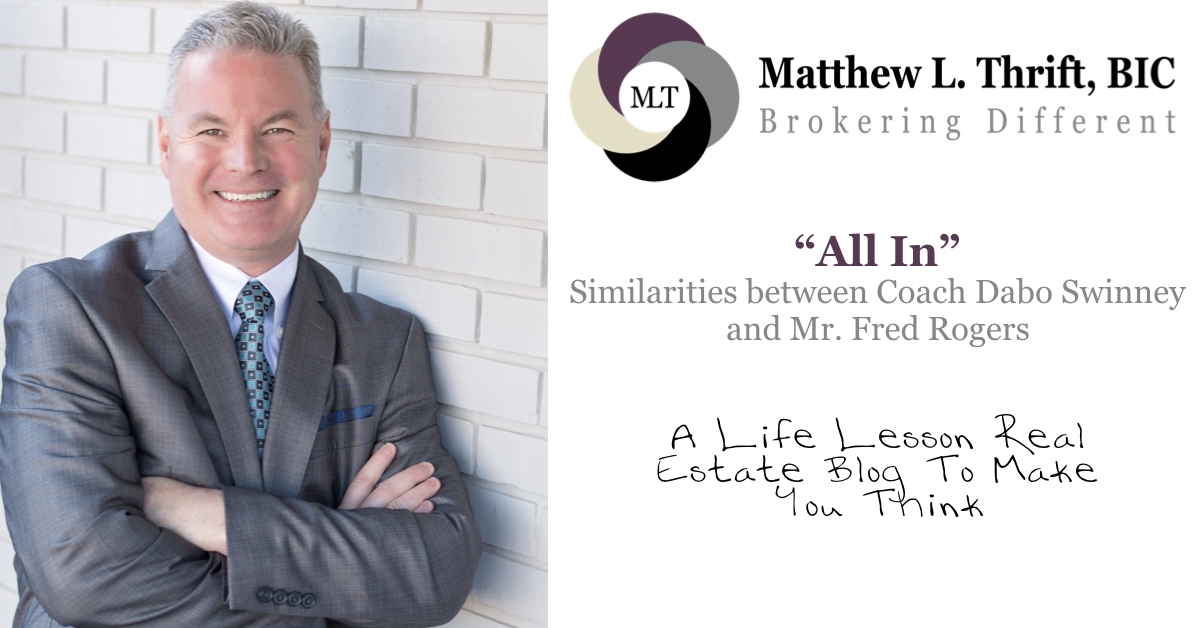 No doubt that if you live anywhere in SC you have probably seen an interview with
Clemson Tigers’ Headcoach Dabo Swinney where Dabo has been quoted to say, “All In.”

What did he mean by that term “All In?” Let’s be honest with ourselves, the term “All In” has been around for decades and is thought to have originally been coined by poker players when they would go “All In” with their card play.

The answer to my question is very simple. Dabo simply was telling his team that if they were not willing to give 100% every time they practiced and every time they played (In other words being “All In”), that they needed to get their items out of their lockers and their scholarship would still be honored. He needed them to literally be “All In!” Check out the video below.

Now let’s take a look at Mr. Fred Rogers. You know who I am talking about, right? THE Mr. Rogers that most Generation X’s and older grew up watching. Maybe even a few millennials will know who I am referring to as well. Here is picture I found online just to remind you of this amazing, loving and caring individual. He is seen here drying the feet of a black police officer during a time in the country where it was frowned upon for blacks and whites to swim together. Mr. Rogers was a huge believer in civil rights and this amazing article about how he crossed culture barriers will literally blown your mind. Click here to read the article outside this post.

In 2019, the movie A Beautiful Day In The Neighborhood was released by Sony Pictures. In order not to give too much away…the movie was based upon the relationship between Mr. Rogers and an Esquire Magazine journalist, Lloyd Vogel (Real life Individual was named Tom Junod). Vogel was sent to expose the character of the friendly and loving Fred Rogers. Unfortunately, Vogel failed miserably and could not find one negative thing on Mr. Rogers.

Mr. Rogers was known for making people feel like they were THE MOST important person in the world when he would speak to them. When children would be on his show, he made the children feel that every word that they spoke were the most important words that he could hear at that time.

In one scene of the movie, there was a telephone call between Vogel and Rogers where Vogel stated that he was sure that Mr. Rogers had better things to do than to talk with him….Mr. Rogers’ statement was so powerful…Rogers said to Vogel, “There is nothing else more important than speaking with you right now.”

So how in the world are Dabo Swinney and Mr. Rogers similar? They each had an “All In” mentality.

This “All In” mentality and mindset is huge for those of you that are self employed or 10-99 sub-contractors. Take for instance the real estate industry. When you speak with your customers or clients do you make them feel like you are “All In” for them? When you speak to them on the phone do they have your full attention? Does your customer or your client feel as if they are the most important person in your life at that very moment?

When you list a property (Remember, this is the largest asset that someone typically owns and there is so much emotion raging through the seller’s mind), do you have an “All In” mindset to do the very best job for that seller that you possibly can? Or do you hurry up and enter it into the multiple listing service with half-hearted remarks and pictures that look as if they were taken by a child?

When you conduct an open house, do you have an “All In” mindset whereas you study the property days before hand (especially if it is not your listing)? Do you learn the community? Do you market the property and the open house to the fullest extent you can in order to have the best turn out for the seller? Do you follow up and thank those visitors that took time out of their day to come and see what you were offering knowing that one day they may become your clients and contribute to your household, the food on your table, and the roof over your head? Or do you simply tell yourself, “I am just doing this out of obligation because that is what new agents have to do.” Do you remember to thank you the listing agent that allowed you to do the open house in the first or is that just taken for granted as well?

Until next time friends. Be intentional, be genuine, and be “All In” ~ MLT