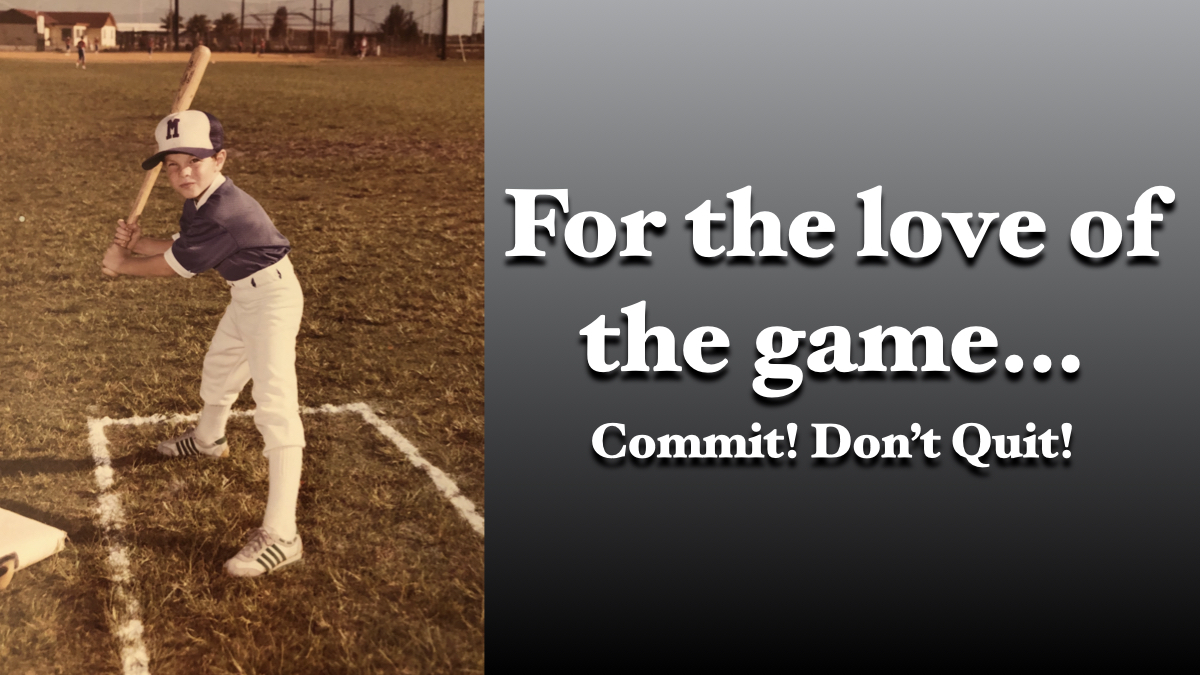 When I was in Elementary school in south Florida I had an interest in playing baseball. I remember the very first time my father took me to my very first practice. It was on the baseball diamond at my school so there was a comfort level there. There was this black rubber stand on home plate that I was not familiar with, and I quickly learned it was called a “T.” You guessed it…I was starting in T-Ball. At that age, I was not developed enough in my skills to hit a ball flying through air. The ball had to sit stationary on top of the “T” in order for me to hit it.

I practiced all the time. And I stuck with it because I enjoyed it. I played two years of T-Ball until moving up where we were hitting moving balls being pitched by other kids my age.

I played baseball for 13 seasons but every year there would come a time when I would want to quit. Just give up…for any number of reasons…I just did not want to play anymore. My father however had different plans. He never pushed me to be the best. He never pushed me to live and breathe baseball so that one day I would go pro. He never said I had to play the next season. What he did say was this, “You committed to your team for this year, it is your responsibility to fulfill your commitment to your team mates and yourself. You will NOT quit.

I soon became one of the best and longest hitters on the team. I made All Stars every year I played ball. I played every position but mainly third base or left field because of my strong throwing arm and my ability to nail the target each and every time. I never quit a team, but by 9th grade my love for the game ended and turned into a love for music. My baseball “career” ended, but the lesson I learned from those years of playing has kept me solid in every career that I have had in my life.

So what does this blog (Yet once again) have to do with Real Estate or even your life in general? Everything!!

I talk to agents everyday that have committed to a real estate career, a brokerage, a team, themselves…and they say they are committed but sometimes their actions can show otherwise. I have listened to at least three widely known real estate coaches and they all say the same thing…Time Block everyday, go into the office everyday, make your contacts everyday, do this, and do that…..BUT BE CONSISTENT and COMMITTED.

Why is it that when people that are self employed that know they have to make business for themselves typically get up everyday and allow life itself to control them and their actions? Basically, “winging it” everyday. Don’t do this! Commit everyday to a routine. Commit everyday to go into the office just like you would if you were on someone else’s pay schedule. You had no problem being on a routine when you weren’t self employed, but it is an act of congress to keep a routine and commitments now that you are. Don’t fall into that trap.

Stay Committed friends. Find your routine, and see how different 2020 can be in your business.

Until next time ~ MLT