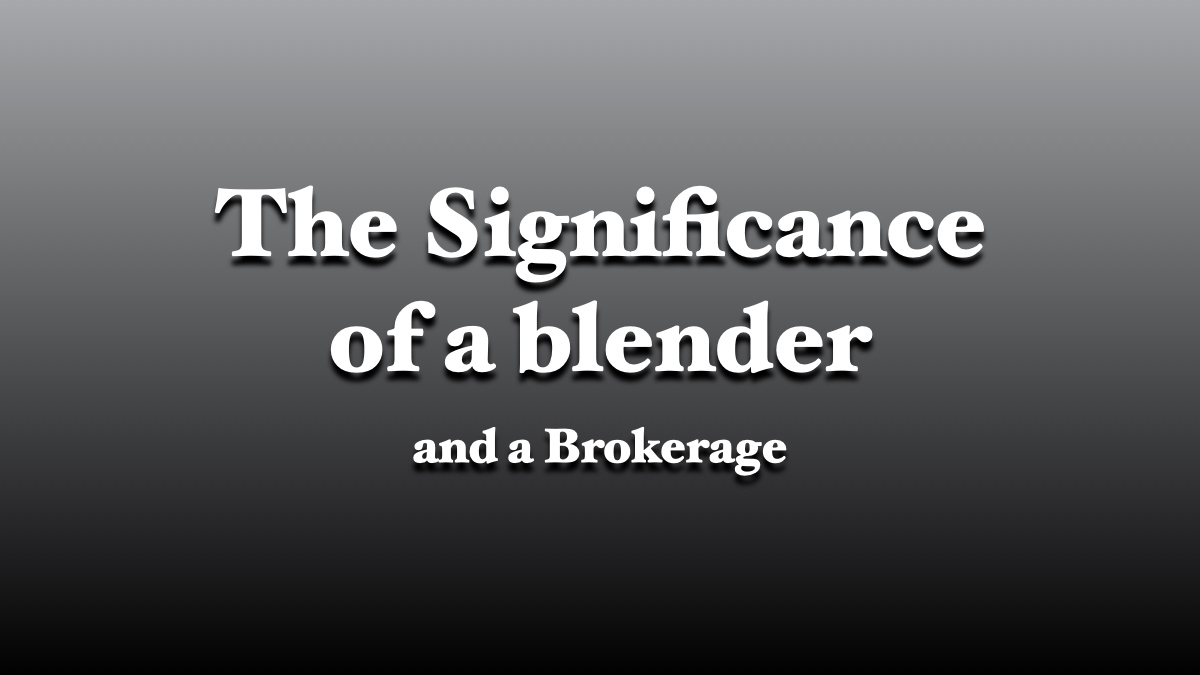 A few years back I purchased a Ninja blender from Costco. It was extremely expensive for a blender, but how often do you buy a one right? It had all sorts of settings and it could juice anything! I swear I think that thing could have juiced an old sneaker. But just like everything that turns, moves, crushes, cuts, etc….it broke. The blade melted out of the plastic housing. No big deal though…I just got on Amazon and ordered a replacement. Not an original Ninja blade but an after market replacement. Cool Right? Not… Nothing worked right after that burnout. Nothing fit right and it sounded like a Boeing 747 was flying through our kitchen every time I made a smoothie! Ridiculous! I had to take Excedrin headache medicine after every use. So I did what most of you would do…I threw that sucker in the trash can and went and purchased another blender at Target. An Oster single blade glass blender with a few settings that cost $24.99. I smiled as I walked out of the store thinking to myself…who needs an expensive blender when I can get the same outcome with this one? I used that blender for a few shorts weeks and quickly came to realize…oh man….I have made a mistake. This thing could hardly blend yogurt and water let alone ice, fruits, and vegetables. It wasn’t extremely loud but still the noise it made was enough to make you wish you could stick needles in your eyes. I got fed up…turned to my Amazon Echo Show and asked this question, “Alexa, show me the best blender sold on Amazon!” Sure enough, she pulled another Ninja Blender. The Ninja BL600 to be exact.  This sucker had a triple blade stalk in the main container and it had just shy of 5,000 reviews and a solid four and half stars. Sold. Received the next day. When I tried this new toy for the first time I was amazed. I could not believe how this piece of engineering history blended fruits and vegetables. And it was so much more quiet than the first two blenders. That triple blade acts like one hundred little Ninja fighters just chopping the heck out of anything you feed it. This thing is amazing!

So what is The Significance of a Blender and a Brokerage?

You see it is very simple. There are numerous agents out there that start out with a brand name / franchised brokerage (Keller Williams, Century 21, Re/MAX, Coldwell Banker, Berkshire Hathway HomeServices, etc…). They may be paying more in monthly fees and have a lesser commission split than the “mom and pop” non-franchised brokerages would charge but that is okay because they are getting what they need at the time. Then as time goes by, they have worked hard and they begin to get worn down just little bit. Some even get to the point of breaking / quitting because this industry is hard with its constant ups and downs. They decide to give up on their franchised / lower paying  company and go for something that will pay them a much higher commission split and most of the time have less monthly fees. Agents services goes way down, but heck….they are getting a higher commission split for a lot less money. No bells and whistles, just a company to hold your license. But what ends up happening? They end up realizing that although they are making more in commission, their business takes a major hit. They see themselves losing listing opportunities because the general public wants to have their listing with a large company for “more exposure.” (I experienced this first hand when I was a solo Broker that owned my own company) They experience a major decline in phone calls / leads because their company does not have very many listings that generate phone calls and maybe it does not have floor time / opportunity time for one reason or the other. There are all sorts of services they realize they now have to pay for on their own. They realize that getting paid more commission doesn’t really help them when their business drops significantly and they are doing 40-50% less than what they were doing in the past. If those agents that leave for a high paid pay, low/no service brokerage don’t get out of the industry within a a few years, they will typically return to a brand name franchise where higher agent services are provided. Not all…but many! And typically when they return to the larger, brand name companies that are high service…they really see the positives and end up doing extremely well in their career. They have experienced what it is like to go with an inferior brokerage and they very quickly realize the significant differences in brokerages. Just like I experienced the difference in an inferior blender. There is a difference in brokerages out there. Choose wisely my friends. Until next time ~ MLT